Save ₹2,099.00
Roll over image to zoom in
Click to open expanded view

When shooting a video sequence you cannot always avoid recording some noise. Sometimes you might find out only in the editing suite that there are some disturbing audio signals in your footage.

To fix this in the postproduction is usually very time consuming and often does not lead to the hoped for results.
How often do you have failed to remove noise like hiss, wind noise or broadband noise from important scenes?
With ACON Digital Restauration Suite for EDIUS it is possible to reduce different kind of noise in less time and good quality.

Great efforts have been put into preserving as much of the
original signal and it’s character as possible during the noise reduction process.

DeNoise2 is designed to reduce stationary noise such as broadband noise, hiss, wind noise, buzz and camera noise.
You can freeze the noise profile anytime in order to perform the actual noise reduction. The noise can be reduced automatically in the adaptive mode or after measuring the characteristics of the noise in the noise profile mode. New in version 2 are dynamic noise profiles that capture the dynamic properties of the noise so that noise that fluctuates over time, such as wind noise, can be effectively reduced. The new algorithm has also been greatly improved and is now even less prone to typical de-noising artifacts. 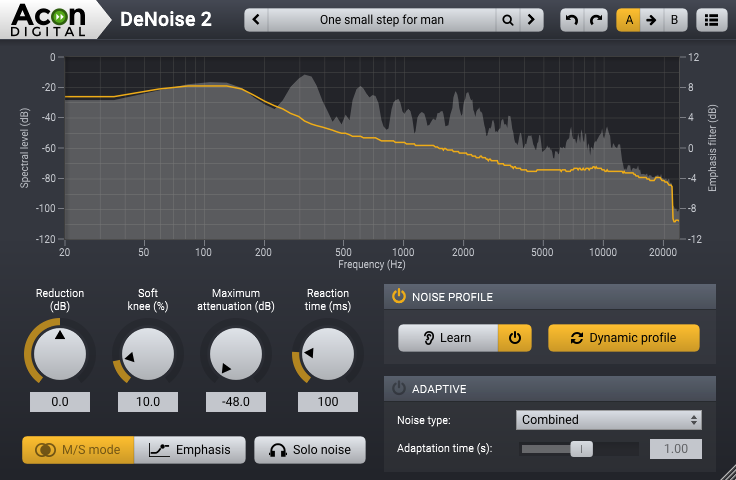 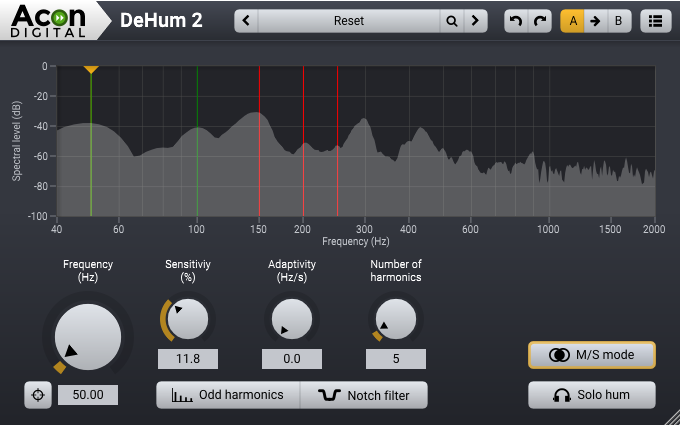 The integrated monitoring function allows you to only reply the audio signal that has to be removed. Using this function parameters can be set precisely.

Impulsive noise such as clicks and crackle are frequently encountered on LP and 78 RPM records, but also occur in digital recordings due to drop-outs or distorted data packets. Due to their metal sound these distortions can be very annoying. DeClick 2’s thump reduction works also effectively on vocal recordings with unwanted plosives. The algorithm has been improved in version 2 and is now less prone to reducing attacks and transients in the wanted signal.

Experts recommend operating a camera manually instead of relying on automatic functions.
This avoids disturbances regarding the volume, which occur when the automatic recording level control tries to set the level of an air condition in the background to the same level of the spoken words of an interviewee.
But when setting the recording level manually clipping can occur. This happens during recording when the recording level is too high and the highest peaks cannot be correctly recorded. DeClip substitutes such distorted peaks with an estimation of the signal curve.
DeClip2 restores audio recordings distorted by analog or digital clipping with an improved algorithm. This also distinguishes the ACON Digital Restoration Suite for EDIUS from other solutions that do not contain such a powerful tool.

All four plug-ins have received improvements both in the processing algorithms and the user interface compared to version 1. DeNoise 2 introduces the novel dynamic noise profiles that help reducing noise that varies randomly over time, such as wind noise or rustle from lavalier microphones. Where the earlier versions merely captured a static noise print with time-constant noise levels, the dynamic noise profiles capture statistics from the noise to be reduced. The noise suppression algorithm then estimates the most suitable noise threshold curve for the noisy input signal using the measured statistics.

DeNoise 2, DeClick 2 and DeHum 2 now support Mid/Side (M/S) processing, which can reduce unwanted fluctuations in the stereo image. The core algorithm in DeClick 2 received improvements and now better preserves transients and can be pushed to higher click and crackle sensitivities without introducing artifacts.

DeHum 2 has a new automatic fine-tune button that triggers automatic estimation of the hum noise frequency. The hum tracking and suppression have also been improved. DeClip 2 was improved in terms of audio quality and now offers even more impressive reconstruction of clipped signal peaks.

All the plug-ins in the suite now support surround and immersive audio formats up to 7.1.6 channels.

Click here to find audio samples before and after being edited with Acon Digital Restoration Suite.

ACON Digital Restauration Suite for EDIUS can be used perfectly in combination with Voxengo Voxformer. It allows you to have best audio quality for your EDIUS productions – for a small price